We have been closely monitoring COVID-19 and as of Tuesday 17 March, have cancelled the remainder of our 2020 Season 1 public events until 9 May 2020. Read our full statement here.

If you have purchased a ticket for an event, our team will be issuing you a full refund shortly. If you have any questions, please don't hesitate to contact our front desk staff at 08 6488 3707 or [email protected]. We send you our very best wishes during this difficult period.

Join us for the launch of our 2020 Season 1 program featuring two new exhibitions:
The Long Kiss Goodbye presented in association with Perth Festival + Boomerang – A National Symbol Hitchhiker's Guide to the Galleries

Get a behind-the-scenes look into Perth Festival's Visual Arts program on this city-wide tour. Buy a $5 bus ticket and take part in the full day of events or choose your own adventure and meet up at different points along the way.

At LWAG, from 11am-12pm, we will be joined by The Long Kiss Goodbye curator and Perth Festival Visual Arts Program Associate Gemma Weston and exhibiting artists Sarah Contos and Penny Coss. Join us at LWAG for our program for visitors living with dementia and their carers or family members.

Let's Meet provides a forum for conversation through the shared viewing and exploration of artworks on display – highlighting themes, artists and artworks currently exhibited. Learn more about the exhibition on this tour and discussion with curator and Perth Festival Visual Arts Program Associate Gemma Weston. Join us for this special event, custom-designed to connect school teachers with our current exhibition The Long Kiss Goodbye. The Friends of the Lawrence Wilson Art Gallery present the next theme in their Art History Lecture Series: Australian Landscape Then and Now. Presented by Carl Altmann, this new series will look at numerous different aspects of landscape paintings from the late-nineteenth to the twentieth century. Refreshments are provided.

Many artists have struggles to depict the Australian landscape. Some, like Arthur Streeton, have portrayed a picture-perfect view of rolling hills and verdant valleys while others, like Russell Drysdale, have shown the harshness of the climate. In more recent years, artists have endeavoured to portray their personal and political thoughts on the country. For Pendulum Acts, Coss will drag, shift and erase layers of her installation to reference her encounters in the landscape as a democratic space, where hierarchies shift and constantly change. Carefully choreographed, the performances speak to the idea of transcience and passages of time. Join us at LWAG and be a part of a weekend-long, nation-wide effort to enhance the understanding of Australian artists who identify as women.

Organised by Wikimedia Australia and the National Gallery of Art's Know My Name project, the event aims to improve statistics that show that just 18 percent of biographies on Wikipedia are about women. All throughout the weekend of International Women's Day, new editors across Australia will be attending workshops and learning to create new pages on female artists. Join the efforts LWAG!

No prior Wikipedia experience required and resources are provided. Just be sure to bring your laptop. The Friends of the Lawrence Wilson Art Gallery invite you to join them on a visit to Robertson Park Artists Studios.

Come meet the artists and join them in discussion about their creative practice. Refreshments provided among the lovely surrounds of the parkland.

Bring your friends to LWAG's next Art Party and join us in celebrating a new academic Semester! 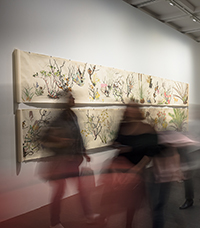 Take some time to slow down and enjoy your day on this unique gallery tour.

Similar to mindfulness exercises that focus on your breathing, in this tour we will settle our minds on the artwork. The session includes close observation of selected artworks from the current exhibitions, followed by an informal discussion on the themes of empathy and emotional intelligence. Due to popular demand, we have scheduled this second workshop with artist Michele Elliot. You are invited to the Inaugural Launch of Tender Funerals Perth WA, featuring a free screening of the documentary Tender.

Written and directed by Lynette Wallworth and produced by Kath Shelper, Tender explores the founding of Tender Funerals, a not-for-profit community funeral service based in Port Kembla. The screening will be followed by a Q&A with the founder of Tender Funerals Australia, Jenny Briscoe-Hough.

Organised alongside The Long Kiss Goodbye exhibtion and its accompanying symposium Ritual and Empathy. From the early 1950s until the early 1970s, the Australian guitar-making company Maton manufactured the Alver, a budget line plywood guitar aimed at students and beginners. From November 1964 until December 1972, the National Service Scheme, in its then latest incarnation, operated in Australia.

Armed with the Maton Alver that he bought a long time ago, Steve Chinna takes you on a trip with tales, songs, and images into a time of living a future deferred, when national service beckoned, the Vietnam War loomed large, Bob Dylan betrayed his fans (yet again), and pop, folk and protest music drove the rhythms of life in the dance venues and on the streets of Perth for the restless mobs of junior clerks and apprentices, living their lives in limbo, waiting for the day that the marble would to be drawn to decide their fate.

$10 ticket includes a complimentary glass of wine on arrival. Death and mourning often lead to rituals that acknowledge and assist with loss and grief. Creativity through art practices that include visual art, dance and song, enrich and comprise ritual that brings empathic connectivity between people and communities, bringing solace and comfort, together with acceptance of and appropriate closure to the life cycle within a wider universal context.

Presented in association with Perth Festival. Traditional displays of boomerangs as with that in the Pitt Rivers Museum in Oxford in the UK have usually arrayed the boomerangs to accentuate their numbers and form.

Join Natalie Hewlett, Collections Manager at the Berndt Museum, to hear about design and display processes undertaken for the exhibition Boomerang – A National Symbol. Investigate empathy and communication through observing and discussing art in this workshop for professional medical and health practitioners. The workshop will be co-conducted by Dr John Terry, UWA Medical Centre, and Dr Janice Lally, LWAG Curator of Academic and Public Programs.

A GP for over 25 years, Dr Terry has worked in Psychiatry, Travel and Emergency Medicine. He has always found the world of visual art a source of inspiration and education and is delighted to be able to make art a very real practical tool for improving observation and communication in the medical setting.

Dr Lally is an art historian who also worked as a medical research scientist, including in neurophysiology and clinical biochemistry, for over 20 years. For Dr Lally, bringing knowledge of art together with science is a means of enriching and extending appreciation and understandings of both. Explore being a visual wordsmith with Anne Pettit!

In this workshop, young people will learn novel ways to engage with the written and spoken word to ‘make pictures’, and experiment to create descriptive short poetry and prose to share and show as temporary artwork.

Anne Pettit, of ACEconnect, is a writer, poet, visual artist and sustainability educator. Campbell Gray, Director of The University of Queensland Art Museum, leads the first discussion in our 'In Practice' series devoted to key issues and developments in gallery and museum practice. In this talk, Gray will explore the complexities of exhibition-making and engaging with audiences.

Campbell Gray has spent 30 years working in art museums. He has been the Director of The University of Queensland Art Museum since March 2011 and previously worked for 14 years as Director, Brigham Young University Museum of Art in Utah, USA. He holds a Doctor of Philosophy degree in Art History from the University of Sussex.

Image: courtesy of The University of Queensland Art Museum.

For adults with hearing loss and their friends and family.

Join us for a free tour in Australian Sign Language of the current exhibition The Long Kiss Goodbye with curator and Perth Festival Visual Arts Program Associate Gemma Weston. The Friends of the Lawrence Wilson Art Gallery invite you to join Carl Altmann who will lead you on a custom tour across the UWA campus.

Begin your journey at the University Club and stopping along the way across the campus to discover some of the unique artworks situated throughout the beautiful grounds of the University of Western Australia.

The tour will conclude back at the University Club with afternoon tea on the front veranda. For visitors with vision impairment.

Join us for a touch and verbal descriptive tour of the current exhibition The Long Kiss Goodbye with exhibiting artist Penny Coss. The tour will include descriptions of the visual elements of artworks on display by a trained guide, in addition to tactile opportunities using sample items and other materials.